In the third and concluding part of her paper on the Nat community academic, writer and human rights activist Madhu Kishwar demonstrates the perhaps unintended, but nonetheless unjust and harsh effect, on this community of the Right to Education Act and other social welfare laws such as the Children’s Act and the Prevention of Begging statutes. The Nats are an impoverished community of wandering acrobatic performers, whose performance traditions go back hundreds of years. Madhu Kishwar’s work on the Nat community illustrates how child rights laws compound the troubles of impoverished children by taking a rigid position on theoretical rights that are of little practical use to them, and by allowing profiteering in their name by corrupt state officials and opportunistic NGOs and lawyers.

Links to Parts I and II of this paper which were earlier published in this series are also included below. A more detailed version of this paper with video recordings of interviews with Nat families will shortly be published on the website of Madhu Kishwar’s organisation, MANUSHI. This article was originally published by the Sunday Guardian on 16 December 2017 with the title Persecution of Nat families under a flawed legal system as part of our weekly series in collaboration with them called ‘Global Child Rights And Wrongs’. 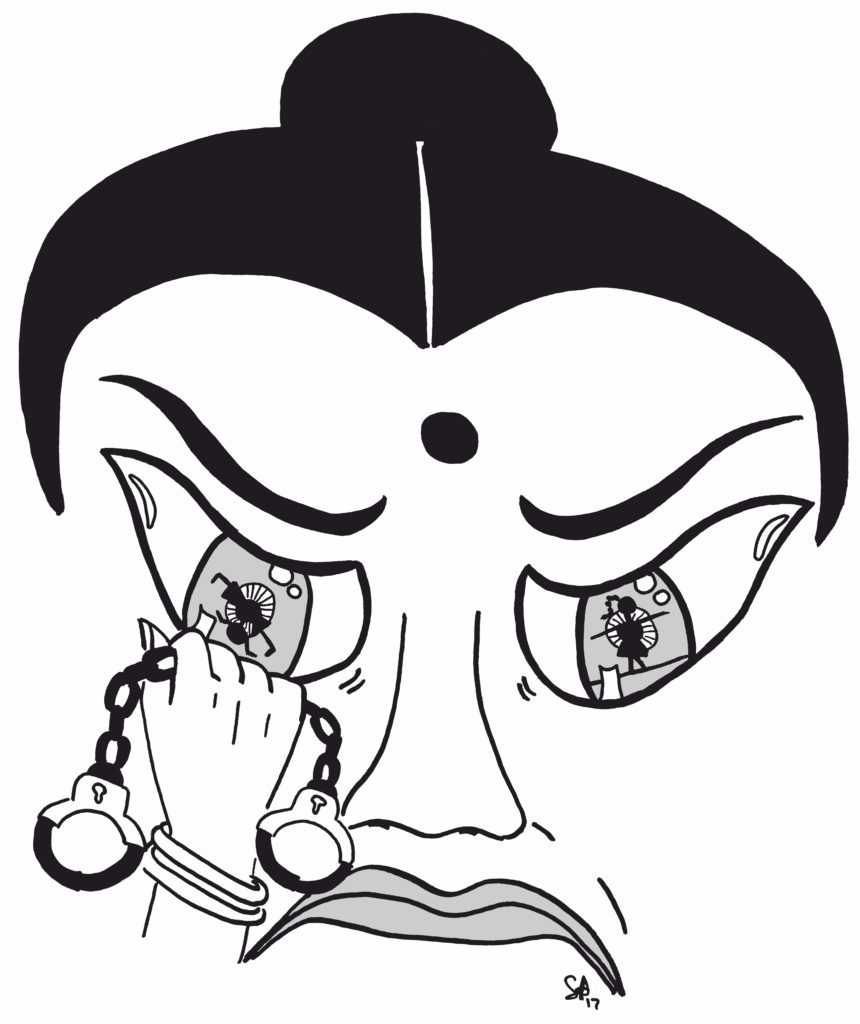 In Part I and Part II of this paper, I described how the children of our traditional art performing communities, namely Nats, are forcibly taken away by the police in collaboration with NGOs claiming to work for child rights while adults are locked up in jail on charges of beggary and using child labour. In Part III of this paper I would like to describe the venality and absurdity of the laws against beggary and child labour.

The anti-beggary laws in post-Independent India draw from the Bombay Prevention of Begging Act 1959 (BPBA). Tragically, this law of free India is modeled after the poor laws of Victorian England.

The criminalization of begging is an altogether colonial construction. Traditional societies have been more tolerant of people who live by begging. In Hinduism and Buddhism holy men and women living off alms is in fact valorized because it is believed to act as an ego perforator and teach humility. It enables Sadhus and Sanyasis to break away from material bondage, especially desire for accumulation. It was in the 1920s that begging was first declared a crime in British India modeled on the Victorian minded anti-poor laws then prevalent in England. Unfortunately, in free India the anti-beggary law was further institutionalized in the form of the BPBA, and extended to 18 states including Delhi.

The law is patently unconstitutional. Apart from targeting the destitute, it treats the legitimate modes of earning livelihood of the already marginalized traditional art communities in India as criminal acts and deprives them of all their fundamental rights guaranteed under the Constitution, in addition to snatching away their children.

Notice the ridiculous overarching definition of beggary under the BPBA:

“Soliciting or receiving alms in a public place, whether or not under any pretense of singing, dancing, fortune-telling, performing or offering any article for sale.” Most traditional art performers are criminalized through this clause.

“Entering any private premises for the purpose of soliciting or receiving alms…” In one stroke, lakhs of Sadhus, Sanyasis, Baudh Bhikshus etc who have taken dharmic vow to live on bhiksha without owning any material assets or even accumulating food are condemned and damned as legal offenders. Under this law, if Mahatma Buddha himself descended into 20th century India, he would have been locked up in jail. This law showed callous disregard for the millennia old faith traditions of India, typical of brown sahib mentality of Nehruvian elite.

“Having no visible means of subsistence and wandering about or remaining in a public place in such condition or manner, as it makes it likely that the person doing so exists by receiving or soliciting alms.” This criminalizes poverty, which in most cases has been a direct result of misguided government policies. The India of 1950’s was still wretchedly poor. Criminalizing poverty in a country whose economy had been brutally wrecked by 200 years of Colonial Rule, pushing vast sections of our peasantry, as well as traditional artisans into destitution and penury, was truly bizarre. And yet such a culturally insensitive and anti-poor law was enacted in the heyday of Nehruvian socialism.

The law moreover has draconian provisions that invest the police or anyone else that the government authorizes to “arrest without warrant any person who is found begging.” This means, there is no need for due process expected of the police when dealing with far more serious crimes like murder or dacoity.

Persons arrested without warrant under the BPBA and similar laws are subject to “summary trial” preceded by “summary enquiry.” There is not even the pretense of an enquiry in real life. The whole process is farcical and fascist in its intent. Its actual working has been described in earlier parts this paper. The punishment under these laws is detention for not less than one year going up to three years.

Even dependents of those convicted can be detained in a certified institution for a like period. This amounts to “guilt by association” and along with destitution, treats dependency as a crime. Children are forcibly separated from parents and sent to hellish protection homes or orphanages, and adult males sent to prison, while women are sent to Nari Niketans [Women’s Homes] which are worse than prisons.

Most Nari Niketans and Children’s Homes have “setting” or arrangements with lawyers who act as their touts for the purpose of filing bail applications. It is a well-organized racket to fleece money from the poorest of the poor.

Most Child Welfare Homes, including those run by high profile NGOs, have become money-making enterprises. “Rescuing street children” has become a lucrative business. The size of their grants from donor agencies depends on the numbers they “rescue”, even if it means indulging in criminal abduction of children and forcibly taking them away from their parents.

The net result of these laws and “rescue” systems is more destitution and indebtedness among the already impoverished who have to beg, borrow and steal to arrange for a lawyer when one or more of their family are taken into custody or jailed. Filing a bail application costs Rs. 5 to 10,000 – that too by third-rate lawyers. If the bail application is rejected, filing an appeal costs a lot more and the process can drag on for long.

In such situations Nat women are at times forced to take to prostitution to raise the required resources for bail and fight lengthy legal cases of the kind I have described in previous parts of this paper.

How Child Welfare Laws Work against the Poor

Any police officer or any other person or organization authorized by the State Government may take charge of a juvenile person for bringing him before a Board. The Board may make an order directing the juvenile to be sent to a juvenile home for the period until he ceases to be a juvenile.

The fact is that in most instances, Nats perform as a family. Some of their art forms require the supple bodies that only children have. Most of them are too poor to send their children to proper schools. By accompanying their parents the children pick up valuable skills that have the potential to become a source of future livelihood. By contrast, going to dysfunctional government schools, the children become good-for-nothing and develop disdain for their traditional work. This is a sad loss of invaluable social capital in the form of their artistic talent. Children of Manganiyars, Kalbelias, Mirasis etc. have often outshone in talent shows on television, so readers will have an idea of the potential that lies among them.

Different Standards for Children of Elites

In any case why should we criminalize these children taking to traditional arts? Even children of elite families are put to work in TV serials, Bollywood or regional films, or made to work for ad agencies. Those who take to sport also start entering competitions very early on. Those who learn classical singing from Ustads also start learning and performing at an early age. But nobody ever dreams of arresting the parents of such child stars or handing over such children to the care of Kailash Satyarthi’s NGO on charges of child labour. Why then target the poorest of the poor whose very survival depends on the street performances?

Their children are neither neglected nor abused. In Parts I and II of this paper I have described the pains these parents take to get their children released. Just witnessing the brutalization these families are subjected to when arrested and separated from their children has been deeply traumatic for me.

Misuse of Right to Education Act

The Right to Education Act is being used as yet another tool of harassment of the Nats. Parents are jailed on the charge of using their children for begging and depriving them of their right to education. Their children are forcibly taken away from them and locked up in “protection homes”. There they are underfed, beaten up and made to clean and cook and do menial tasks in the Homes. Many of these protection homes do not allow parents to even visit their children. Even jail inmates guilty of heinous crimes are allowed visitors from among close relatives. But children of the poor forcibly put in orphanages or protection homes are not allowed any contact with the outside world.

Releasing a child from these Homes requires soul-destroying amount of legal procedures, paper work, including producing identity papers, caste certificates from local sarpanch, NGO guarantors who will take responsibility that the child will be educated. The process can take weeks or months. Procuring these certificates requires several trips and bribes. The child is not released in the city or town from he/she was taken into custody but in the native home town or village. This also involves a great deal of additional expense. Those who don’t have identity papers, have no escape.

The Natnis locked up in Nari Niketans are subjected to abusive behavior, treated like prostitutes, and often sexually exploited. The release of a sentenced adult on bail involves a minimum expense of Rs. 10,000 by way of legal costs, bribes and another Rs. 10-15000 for getting a child out of “Protection Homes”

During the period they are in state custody, the entire family is without work and falls into debt trap. The only safety net they have is close community and kinship ties, as no bank or other institution is available to them for credit or other support.

As a result, Nats in the clutches of these laws have to borrow money at usurious rates for legal expenses. Often the only way to raise money for these recurring emergencies is for Nat women to prostitute themselves.

The ever-hanging shadow of law owing to the criminalisation of their way of living results in Nats leading traumatized and insecure lives. This inevitably results in loss of self-esteem and erosion of respect for their art. Most are abandoning their occupation and end up as unskilled laborers in menial low paying jobs, just as millions of impoverished farmers, skilled weavers, goldsmiths and other traditional artisans are doing.

When communities whose skills were honed over centuries are forced out of their traditional occupations and join the ranks of unskilled manual labour force it represents a great civilizational tragedy.