A version of this article was first published on 22 October 2017 with the title ‘The threat posed by global child rights conventions’  ( http://www.sundayguardianlive.com/culture/11301-threat-posed-global-child-rights-conventions ) in the Sunday Guardian as part of its ongoing series with us called ‘Global Child Rights, and Wrongs’.

Almost no country from Asia, Africa or the Middle East has signed the Hague Convention on Civil Aspects of International Child Abduction (Hague Convention). The extraordinary US efforts to get India to do so seem to be with an eye to getting others in the Global South to follow suit.

Contrary to what US consular officials in India are saying, the Hague Convention is not limited to inter-parental custody disputes.

Contrary to what US consular officials in India are saying, the Hague Convention is not limited to inter-parental custody disputes. For such disputes, procedures for the recognition of foreign custodial orders already exist in India and the USA. Going beyond parental custody, the Hague Convention grants powers to any “institution” or “other body” to make cross-country custodial claims over children. This would allow child protection agencies to chase both parents around the world to forcibly extradite their children.

Norway, whose child welfare agency is notorious for snatching children unreasonably, especially of immigrants, is already using the Hague Convention to force back children leaving Norway with their parents when its child welfare services come knocking on the door.

Recently I submitted a report to the Indian government on the wrongful confiscation of children of newly arrived Indian IT professionals by US child protection services (CPS). Parents had proven themselves innocent, but not until after their children had been traumatised for months in foster care with strangers. Parents spoke of racism in the US child care system. US lawyers, academics, and even child protection officials have said that CPS often wrongly removes children. This website has links to extensive information on injustices by US CPS agencies here and here.

Sometimes Indian families ask for the repatriation of children taken into US foster care, so that the children can be with their relatives in India while the parents prove their innocence in the USA. But such repatriation is resisted by CPS agencies whose funding is often linked to the number of children in care. In these circumstances it is unfair to ask Indians to give CPS agencies another means for forcibly retaining children via the Hague Convention. 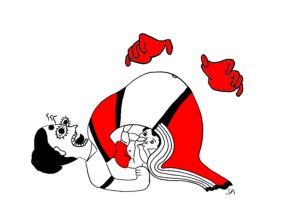 After I, along with a Delhi-based human rights group, gave submissions to the Indian Committee considering implementation of the Hague Convention, mothers contacted me with stories of how CPS threatened to take their children when they reported domestic violence in the USA. This is typical of Western CPS agencies: to label mothers as unfit for having ‘chosen’ abusive partners, and then remove their children. Mothers in this situation were forced to flee to India to save their children from being taken.

The suffering of left behind parents in the USA described by US officials when advocating for the Hague Convention would be exactly mirrored in the suffering of the Indian-resident parent were their children to be forcibly deported under it. This brings us to the larger issue of the misery being wrought on parents and children from the breakdown of the family as an institution. The modern family is in crisis. But let Governments not compound the problem by taking sides. Instead, let them take on the role of the ‘Wise Elder’. Rather than making unilateral claims over children as envisioned in the Hague Convention (and as often made by divorcing parents), let India and the USA negotiate terms that would foster a child’s relationship with both its parents.

It is surprising that of all US governments, it is the Trump Administration that is pushing for the Hague Convention. This instrument is part of an array of anti-family and globalist regulations that aim to give the State supra-custodial rights over children. Leading this effort is the United Nations Convention on the Rights of the Child (UNCRC). The USA has refused to sign the UNCRC despite international pressure. There is some recognition in the USA that the UNCRC devalues family life, and is founded on some very un-American ‘Big Government’ ideals of the welfare states of Europe.

Despite America’s rejection of the UNCRC, the Clintons, under the special efforts of Hillary Clinton, managed to introduce UNCRC-style child protection in the USA in 1997 via the Adoption and Safe Families Act (ASFA). Hillary Clinton was influenced by Scandinavian Far Left feminists in favour of Big-State interventions in the family. ASFA brought about a fundamental change in US child welfare policy, favouring long term foster care and third-party adoption of vulnerable children over keeping them with their birth families.

Although ASFA had cross-party support, there has always been opposition from ordinary Americans to unwarranted intrusion by CPS agencies. The opposition to CPS is largely ignored by the mainstream media but is voiced by many in President Trump’s base –  practicing Christians and the so-called “Alt Right”.

My work helping Indian families abroad who were victimized by CPS brought me into contact with activists around the world trying to expose its atrocities. Like me, many of them feel betrayed by liberal intellectuals. How was it that people like Hillary Clinton actively fostered a system that was causing such grave injustice, especially to mothers, impoverished families and immigrants? Children were being snatched in the most brutal and undemocratic manner, and all you heard from liberals were sanctimonious declarations of children not being the “property” of parents. Ofcourse they are not. Neither are they the property of the State!

What Trump supporters in the USA say against globalism echoes with many of us CPS critics as we struggle to understand how the well-meaning effort to help abused and disadvantaged children went so wrong. Globalism can be oppressive and manipulative. In the field of child policy it is being used to impose standards without regard to ground realities or democratic principles. International interventions through the so-called “rights-based” model of welfare use the language of human rights to censor debate and stifle diversity in beliefs and attitudes.

My foreign friends from my student years abroad offered no help when I contacted them about Indian families wrongly targeted by CPS. I was instead lectured on how “this doesn’t happen here”. A refrain repeated by left behind parents from the USA asking me to drop my opposition to the Hague Convention.

But for every friend who shrugged me off, there was a faithful Christian stranger who came to the rescue. They had seen the mistake that lies at the heart of the international child protection project: the failure to see that filial ties, and the strengthening not the severance of those ties where they are weak, are essential to child welfare. These conservative Christians were organised, informed and compassionate. It was the liberals who were ignorant, unfeeling and arrogant – labels they so freely hand out to others.

My journey from being a typical college-educated feminist and liberal to the unlikely terrain of the Alt Right and Christian conservatism is not uncommon with CPS critics globally. The suffering we have personally witnessed led us to question, not just CPS systems, but the wider reasons for their creation. The finger pointed straight back at ourselves and our liberal values – especially hedonistic individualism and the devaluation of the family.

The only political movement that flouts political correctness to gesture at these issues, albeit clumsily, is the Far Right in the USA. I believe that the impulse the world needs to get out of the moral anarchy and despair into which we have been plunged by modern values will come, if not directly from the Alt Right or Christian conservatives, then inspired by their forebodings and intuitions about where we are, and how we must get out of here.

President Trump would be surprised to learn how many Americans, including mothers of Indian-origin, who suffered at the hands of US CPS, though not natural conservatives, could not bring themselves to vote for Hillary Clinton. As it was she who ushered CPS in its current unjust form in the USA.

Like with President Obama, we have seen President Trump’s initial promise of change founder. The Trump Presidency is under ruthless attack. Perhaps the only way for it to survive is to compromise on many of the President’s radical campaign promises.

But the fight against globalism and for the reassertion of American freedoms need not be given up entirely. It can be articulated through the worldwide resistance against CPS injustices. If there has ever been an example of the folly of internationalism and unchecked state intervention in private life, it is CPS. Here is a cause that President Trump could take up, and thereby reclaim the crown of thorns that his base bestowed upon him with so much hope, as the man for those left out and oppressed by present-day liberalism.

Suranya Aiyar is a New Delhi-based lawyer and mother. She has several publications criticizing the role of governments and NGOs in child-related policy.